FORT WORTH, Texas – American Aero FTW, a fixed-base operator (FBO) located at Meacham International Airport in Fort Worth, Texas, presented a $21,346 check to the Navy SEAL Foundation during the NBAA 2016 Business Aviation Convention & Exhibition in Orlando in early November. The Navy SEAL Foundation provides immediate and ongoing support to the Naval Special Warfare community and its families during times of tragedy as well as triumph.

“Our goal is to honor heroes like Rory, who represent America’s most elite warriors, and members of our own staff—current and former military—who represent other branches of the military,” Brown said. “Through this donation, we help support the critical work of the Navy SEAL Foundation on behalf of the warriors, veterans, and their families.”

This donation marks the FBO’s fourth annual contribution to the Foundation. The FBO’s “Red, White and Blue” program enables customers to contribute 10 cents from every gallon of fuel purchased to the Navy SEAL Foundation, and American Aero FTW matches those donations dollar for dollar.

The nonprofit supports elite warriors and their families by empowering and assisting them through challenges and triumphs. Navy SEAL Foundation CEO Robin King said the organization aligns itself with businesses like American Aero FTW that demonstrate equal integrity and concern.

“The Navy SEAL Foundation is committed to honoring and supporting our nation’s elite warriors and their families through immediate and ongoing support,” King said. “We serve over 9,000 active duty personnel, as well as former Navy SEAL members and their families, and we are grateful for companies like American Aero FTW and its customers for supporting this important mission.” 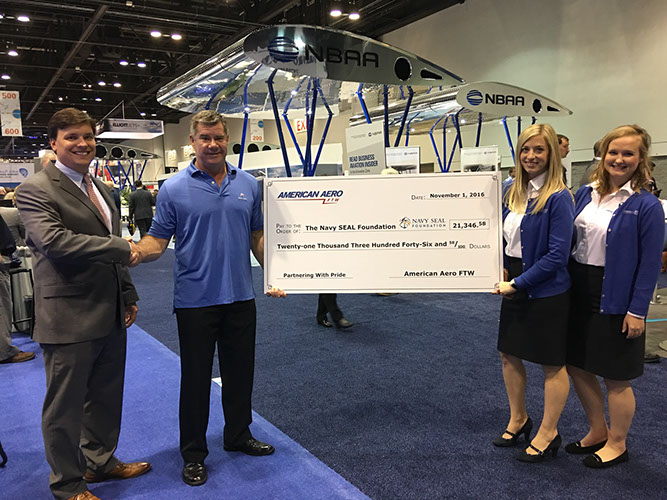 ABOUT THE NAVY SEAL FOUNDATION
Built on an unparalleled legacy and established in 2000, the Navy SEAL Foundation is a 501(c)(3), tax exempt, national, non-profit benevolent organization headquartered in Virginia Beach, VA. The Foundation is a resolute cornerstone for the Naval Special Warfare community and their families in times of adversity and triumph. A comprehensive set of programs designed to improve health and welfare, build and enhance resiliency, empower and educate families, and provide critical support during times of illness, injury, and loss is the Foundation’s focus.