FORT WORTH, Texas (Nov. 17, 2015) – American Aero FTW, a fixed-base operator (FBO) located at Meacham International Airport in Fort Worth, Texas, presented a $20,000 check to the Navy SEAL Foundation at the NBAA 2015 Business Aviation Convention & Exhibition in Las Vegas on November 17, doubling the contribution made at the convention last year. The Navy SEAL Foundation provides critical support to the Naval Special Warfare Community and its families during times of illness, injury and loss.

“A number of our employees are current or former members of the military, and we have the highest regard for this nation’s service men and women,” said Riggs Brown, American Aero FTW general manager. “This donation is part of our ongoing commitment to honor those heroes and support the important work of the Navy SEAL Foundation.”

Navy SEAL Foundation CEO Robin King said the nonprofit is committed to the well-being of the U.S. Navy SEAL community and aligns itself with patriotic businesses that demonstrate equal integrity and concern.

“The generosity of American Aero FTW’s leadership and its clientele is a sure sign of their commitment to our nation’s elite warriors and their families,” King said. “It is truly an honor to have a business like American Aero FTW seek out the foundation to support it financially, promote it to customers, and recognize it during NBAA.”

ABOUT THE NAVY SEAL FOUNDATION
Built on an unparalleled legacy and established in 2000, the Navy SEAL Foundation is a 501(c)(3), tax exempt, national, non-profit benevolent organization headquartered in Virginia Beach, VA. The Foundation is a resolute cornerstone for the Naval Special Warfare community and their families in times of adversity and triumph. A comprehensive set of programs designed to improve health and welfare, build and enhance resiliency, empower and educate families, and provide critical support during times of illness, injury, and loss is the Foundation’s focus. Visit 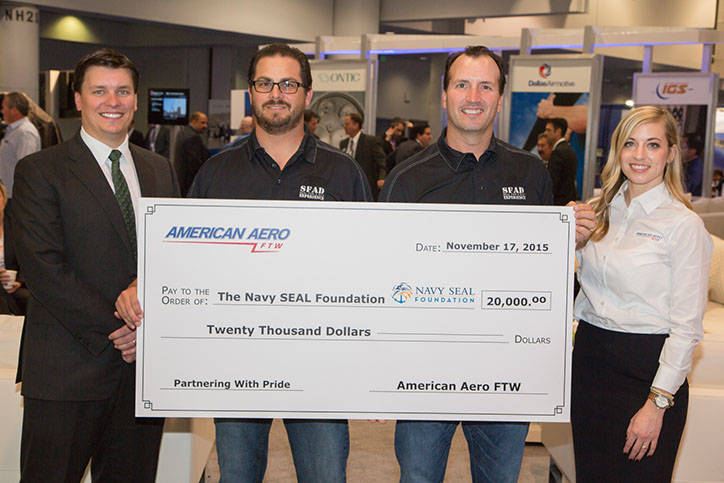 Franzia and Nemee are volunteer ambassadors for the NSF and co-founders of the organization, SEAL FOR A DAY LLC.  This organization provides NSF donors and corporate partners the opportunity to participate in team-building exercises and live-fire training with Navy SEALs at a private military training range in central California.