FORT WORTH, Texas (January 24, 2017) – A new day has dawned at Meacham International Airport, thanks to a public/private partnership between the City of Fort Worth and American Aero FTW, a fixed-base operator, or FBO.

Today, city officials cut the ribbon on a new, 85,000-square-foot administration building, marking a significant milestone in the history of the 91-year-old airport. American Aero FTW will be the prime tenant and only FBO in the new facility.

The makeover of the administration building is being funded primarily by the City of Fort Worth with a major investment by American Aero FTW, owned by financier and philanthropist Robert M. Bass.

“The city’s commitment to rebuild the terminal and invest in upgrading the airport created the opportunity to partner with the city to make Meacham International Airport a major gateway. We worked with the city to create a five-star experience for our tenants, the arriving and departing pilots, and their passengers,” Bass said.

“This is a significant transformation for the airport which opened in 1925, and American Aero FTW has played a key role in making it happen,” said Jeff Kloska, assistant director of aviation and manager of the airport. “This is a proud day for Meacham International Airport, which is now poised for growth as the premier corporate and general aviation facility in North Texas.”

The new facility was also designed with the latest technology, including:
• Intelligent, electrochromic windows that automatically tint to reduce heat and glare while maximizing natural light
• Sound-masking to enhance the customer experience
• Wireless fuel meter system for instantaneous and precise on-ramp transactions

In 2015, American Aero FTW became the first FBO in the Western Hemisphere to earn International Standard for Business Aircraft Handling (IS-BAH) accreditation, which recognizes rigorous safety and ground handling operations. In addition to the new facility, American Aero FTW has built three new, state-of-the-art hangars, more than doubled its hangar space, for a total of 280,000 square feet of leasable hangar and office space. The FBO also offers 11 acres of open ramp, monitored 24/7, and U.S. Customs services onsite and on the ramp.

“By partnering with the city, we have enhanced Meacham International Airport’s profile and revitalized a key sector of the community,” said Riggs Brown, general manager of American Aero FTW. “Vibrant airports make vibrant cities, and we are proud to play a role in drawing more pilots and passengers to Fort Worth.” 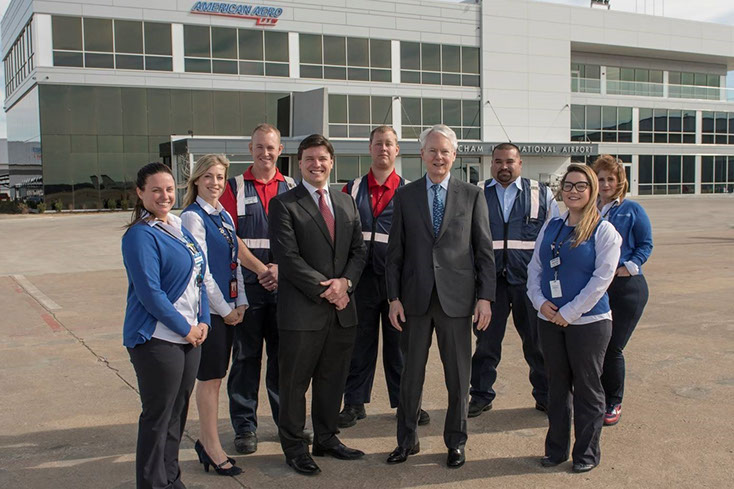