For $170,000 in Total Donations for Pilot License Scholarships

WORTH, Texas (Nov. 30, 2022) – The Navy SEAL Foundation presented American Aero FTW with a commemorative plaque “in appreciation and recognition of exemplary leadership and steadfast support for U.S. Navy SEALS and their families.” For the ninth consecutive year, the Fort Worth fixed-base operator (FBO) serving private aviation travelers at Fort Worth Meacham International Airport has made a sizeable donation to the Navy SEAL Foundation (NSF) and continues to fund a popular scholarship it helped establish in 2017, which supports pilot certification for active duty and veteran SEALs and Special Warfare Combat Crewmen (SWCC).

As part of its commitment to veterans and military service members, American Aero presented the Navy SEAL Foundation with its 2022 donation—a check for $18,875,funded by a portion of fuel sales. That brings the FBO’s total contributions to $170,000.

Over the years, the Navy SEAL Foundation pilot certification scholarship has gained popularity among active duty and veteran SEALs. The offering has been expanded by the foundation, and this year alone, more than $61,000 in aviation-related scholarships have been awarded.

“The aviation industry is facing a severe pilot shortage, and who better to step into those roles than the unique breed of men and women who have served our country as SEAL team members,” said Bob Agostino, American Aero vice president. “American Aero’s annual contribution to the Navy SEAL Foundation is just one way we support those willing to make whatever sacrifice necessary to preserve our freedom and safety; therefore, we are honored to create opportunities for our best and brightest to join the aviation community.”

“I was over the moon when I checked my email and saw I was awarded $4,000 for the NSF scholarship!” said one recipient (name withheld for confidentiality).

“Since medically retiring, I have been utilizing VA benefits to go to college and attend flight school as I work toward a new aviation career. The catch is, getting a job in aviation is all about how much flight time you have, and flight school only provides about a third of the time needed before I can apply for a good job,” he said. “The funds provided will cover a significant amount of flight time and training, which will get me that much closer to getting paid for flying bigger, faster airplanes.”

“Thank you to American Aero, and especially American Aero’s loyal patrons, for supporting our transitioning warriors with this incredible aviation scholarship initiative,” said Robin King, NSF’s chief executive officer. “By helping transitioning NSW [Naval Special Warfare] members as they work to enter the aviation industry, American Aero’s investment benefits not only the individual but the family, community, and our nation at large. We look forward to continuing our programmatic partnership and assisting more transitioning SEALs as they continue their careers in the civilian sector.”

American Aero is a long supporter of the U.S. military and holds the exclusive Defense Logistics Agency contract to serve all military and government flights into and out of Meacham International Airport.

“American Aero is proud to support the Navy SEAL Foundation and employ men and women who serve or have served our country,” said Angela Thurmond, American Aero general manager. “The same attributes that contribute to a successful military career align well with American Aero’s stringent safety and service culture.”

American Aero consistently ranks as the best FBO in Texas and one of the top FBOs in the world in the Aviation International News FBO Reader Survey. 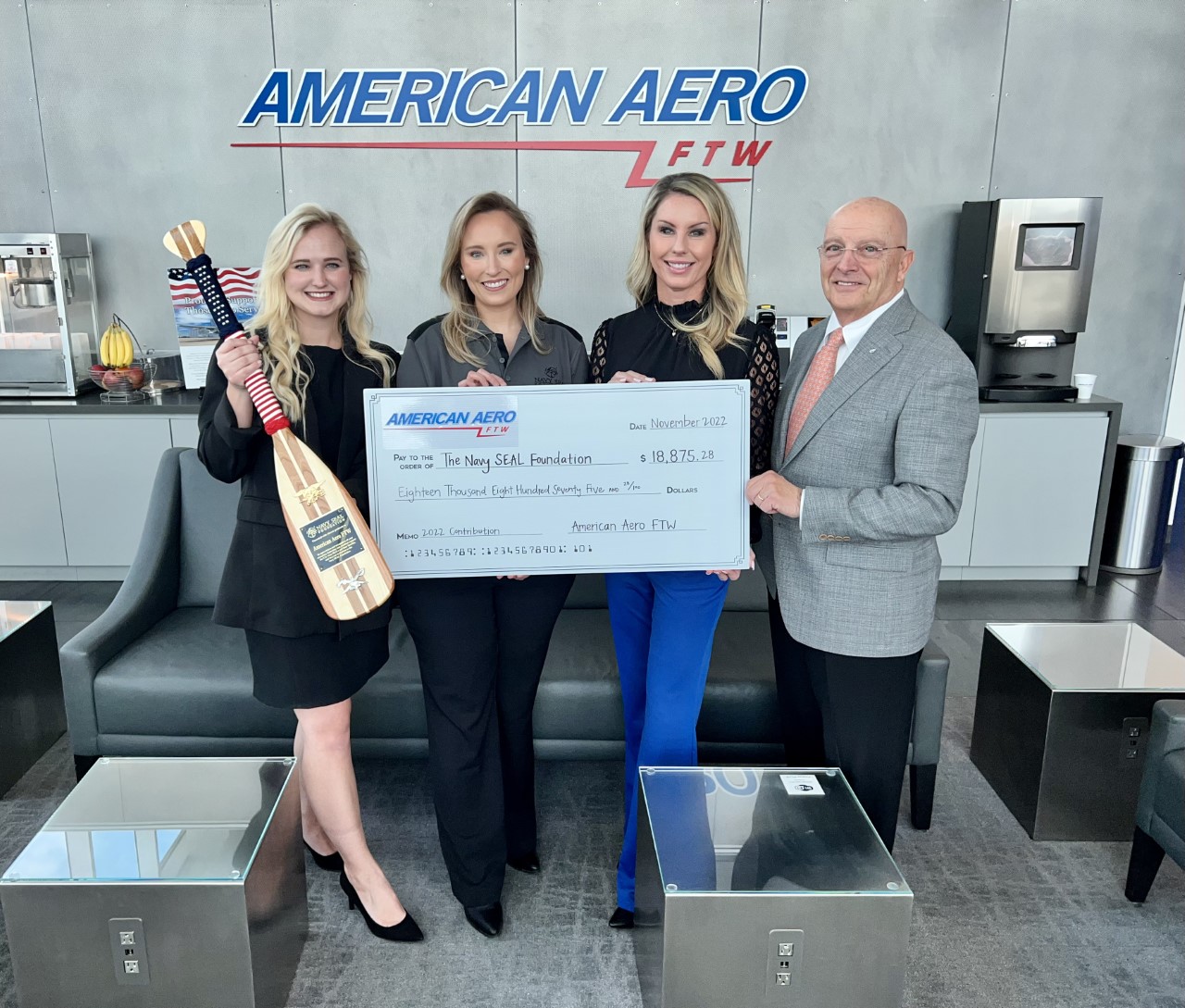 About the Navy SEAL Foundation

The Navy SEAL Foundation (NSF) provides critical support for the warriors, veterans, and families of Naval Special Warfare (NSW) through a comprehensive set of over thirty programs under five Pillars of Support: Strength, Resilience, Health, Education, and Community.

NSF is a high-performing organization committed to excellence. Charity Navigator has awarded it a 4-star rating since 2009 and a perfect score of “100” since 2014 for financial health, accountability, and transparency. The Foundation ranks higher than 99.9% of over 195,000 charities nationwide, with ninety-three cents of every dollar donated directly funding its programs or being retained for future mission use.

NSF is a 501(c)(3) national nonprofit charitable organization with TAX ID 31-1728910. It is not a part of the Department of Defense or any of its components and has no official affiliation with any federal entities. To learn more, visit www.navysealfoundation.org.

American Aero FTW, founded in 2012 by Anne T. and Robert M. Bass, is a fixed-base operator (FBO) located at Meacham International Airport (KFTW) in Fort Worth, Texas. The business is focused on refueling, ground handling, servicing, and storing of business and private aviation aircraft and provides extensive crew and passenger amenities. American Aero consistently ranks as one of the best FBOs in the world in the Aviation International News FBO Reader Survey. It is also one of only a handful of FBOs in the world to earn the International Standard of Business Aircraft Handling’s highest safety accreditation from the International Business Aviation Council. American Aero is an AvFuel branded and Signature Select™ affiliated FBO. It is the primary tenant and only FBO in the airport’s administration building and offers 280,000 square feet of leasable hangar and office space. More information can be found at www.AmericanAero.com.