(817) 289-8000 info@americanaero.com
Back to Newsroom
AMERICAN AERO FTW MAKES ANNUAL DONATION TO NAVY SEAL FOUNDATION AT 2019 NATIONAL BUSINESS AVIATION ASSOCIATION CONFERENCE, FUNDING TOPS $116,000 OVER SEVEN YEARS
Fort Worth, Texas, FBO shows military commitment with scholarship for flight training
FORT WORTH, Texas (October 22, 2019) – When American Aero FTW opened its doors in 2012, the FBO at Meacham International Airport (KFTW) in Fort Worth, Texas, committed to supporting military service members. Today, American Aero demonstrated that backing once again by delivering a check for $16,210 to the Navy SEAL Foundation at the 2019 National Business Aviation Association conference in Las Vegas. This marks the seventh donation to the Foundation in as many years, for a total contribution of more than $116,000. The annual gift is partially funded by customer contributions and matched 2-to-1 by the FBO. In 2017, American Aero designated donations to support scholarships for SEALs interested in obtaining their pilot certification. Since then, ten active and retired SEALs have been awarded scholarships for that purpose, pursuing educational programs for certifications such as FAA Rotary Wing Pilot Commercial Add-on, Rotorcraft-Helicopter Private Pilot and Commercial Pilot Aviation Instrument Rating certifications. “We are so grateful to American Aero and its patriotic clientele for their continued support of the Navy SEAL Foundation with this, their seventh annual donation. Advanced education creates more opportunities, especially in today’s competitive job market where many transitioning military members find themselves,” said Robin King, CEO of the Navy SEAL Foundation. “American Aero is paving the way for NSW members interested in becoming civilian pilots to achieve that goal and we can’t thank them enough.” Earlier this year, American Aero was also awarded a four-year Defense Logistics Agency contract to serve all military flights into and out of KFTW. That means the FBO is the lone provider for those services at the airport. “We are sincerely honored to serve our military personnel and thrilled that we can create opportunities for those who wish to join us in our love of aviation,” said Robert M. Bass, founder of American Aero. “The men and women in every branch of our military demonstrate courage and integrity, and their commitment to service is one that we seek to reflect in our daily interactions with customers.” American Aero also shows its support for servicemembers through employee recruitment and hiring. At any given time, nearly one-third of the FBO’s line service team is made up of reservists or retired military personnel. “The qualities that make for an exceptional military career are also highly valued by American Aero, and those employees are a tremendous asset to our team,” said Angela Thurmond, American Aero general manager. “Attributes that contribute to success in the military align with our stringent culture of safety and service.” In 2019, the annual AIN FBO reader survey ranked American Aero FTW the #1 FBO in Texas and the Southwest, and one of the top 5 FBOs in the world. The FBO also supports an annual holiday toy drive at KFTW for the U.S. Marine Corps’ Toys for Tots program, donating hundreds of bicycles and toys to local children in need each year. 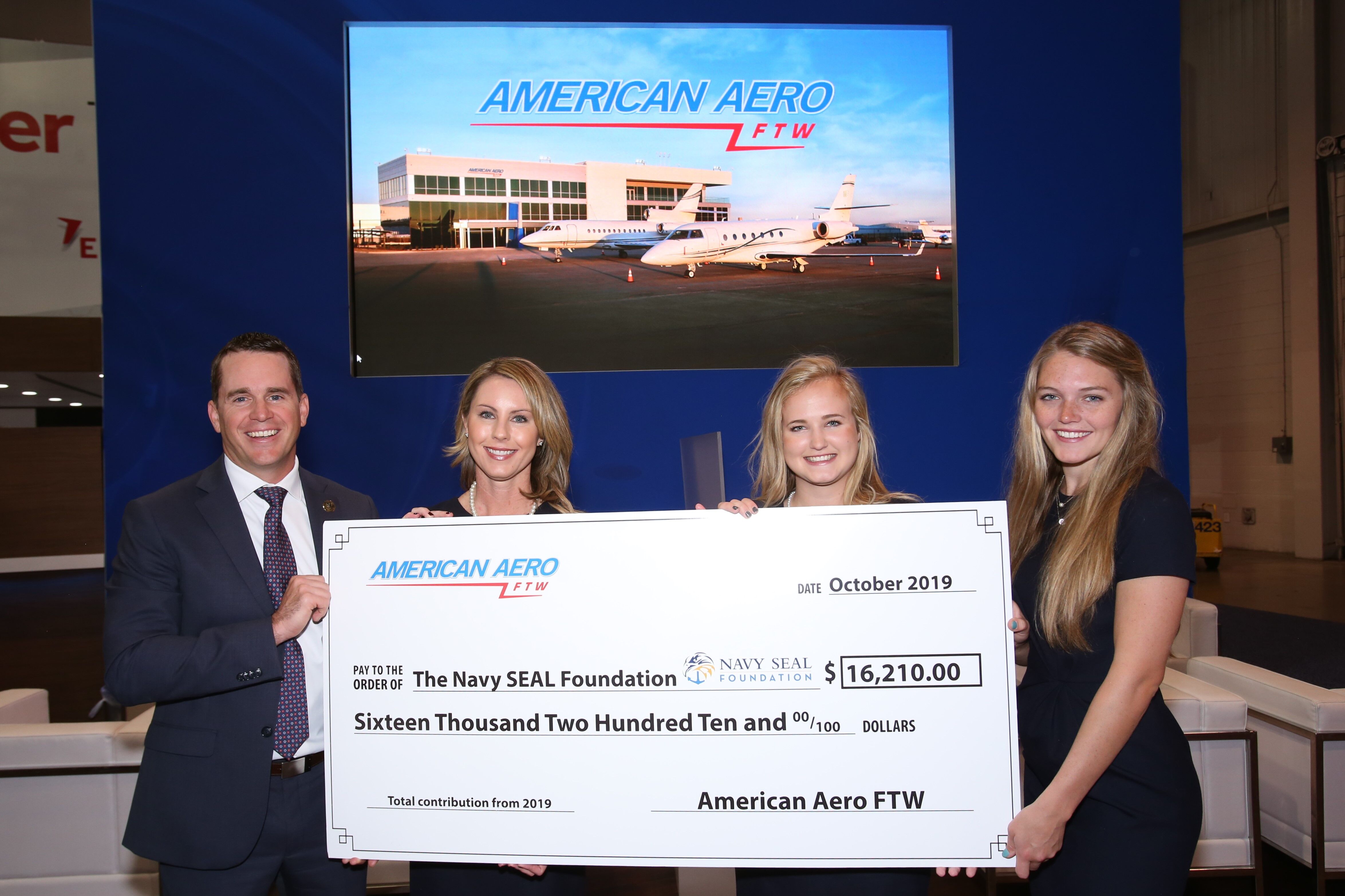 About the Navy SEAL Foundation The Navy SEAL Foundation’s mission is to provide immediate and ongoing support and assistance to the Naval Special Warfare (NSW) community and its families. U.S. Navy SEALs have been in sustained combat for over 18 years, performing hazardous work in unforgiving environments at an unrelenting pace. SEALs are currently deployed in over 30+ countries across the globe and can spend up to 270 days each year in harm’s way. The Navy SEAL Foundation stands behind these warriors and their families by providing a comprehensive set of programs specifically designed to improve health and welfare, build and enhance resiliency, empower and educate families and provide critical support during times of illness, injury or loss. Like the community it serves, the Navy SEAL Foundation is a high performing organization committed to excellence. NSF has received eight consecutive 4-Star ratings from Charity Navigator. It is one of less than 70 charities from among more than 9,000 to have earned a perfect score of 100 for our financial health, accountability, and transparency, placing NSF in the top 1% of the rated charities. Ninety-four cents of every dollar donated goes directly to programs or is retained for future mission use. The Navy SEAL Foundation is a 501c3 national non-profit charitable organization. TAX-ID 31-1728910. The Navy SEAL Foundation is a non-federal entity. It is not a part of the Department of Defense or any of its components, and it has no governmental status. For more information, please visit: http://www.navySEALfoundation.org